WEEE around the world 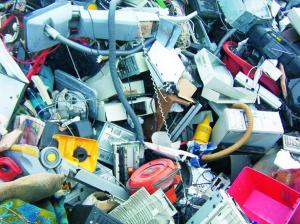 It might not be a surprise to hear that the UK isn’t the only country producing millions of tonnes of e-waste or WEEE each year. In 2014 alone a staggering 41.8 tonnes of e-waste was generated worldwide – and if the figures are anything to go by this won’t be decreasing any time soon. Compared to 2010 when we produced 33.8 million tonnes to a predicted 45.7 million tonnes in 2016 you can see why it is so important that e-waste is managed.

Waste electronics are made up of a myriad of electrical objects that for whatever reason, be that end of life, technological upgrades or changing in fashions, are thrown out by domestic or business users. It can be anything from servers to mobile phones, lamps to computer screens.

The top 5 e-waste producing countries in order of weight produced are; USA, China, Japan, India and Great Britain. Considering the difference in population size between the first and fifth position it shows that the people of the UK are producing a similar percentage of waste per capita to the United States.

Despite the term e-waste it doesn’t actually mean that the items we are throwing away are worthless. The estimated total value of the waste the world is producing amounts to about 48,000,000,000 Euros! Iron and steel are the main materials in our e-waste at 16,500 kilotonnes but plastics make up the largest material worth at 12,300 million Euros. Some of the things you might not expect to find in e-waste – did you know that 60 elements from the periodic table can be found in complex electronics? Or that roughly 300 tonnes of gold worth 10,400 million Euros is hiding in there somewhere too? No, I didn’t think so.

But before you quickly run to the local landfill to find the gold that’s hiding in ‘them there hills’ you should take a look at our website. Pure Planet Recycling are an award winning team that provide a wide range of WEEE recycling services to businesses that need help with their waste management – because it isn’t as simple as just throwing it out.

The world is now more aware than ever about the importance of managing our e-waste. The figures we’ve talked about show the immense quantities that we as a nation contribute to the 41.8 million tonnes the world produces. Talk to Pure Planet Recycling on 01234 315496 today to manage your company’s contribution responsibly. Alternatively you can see the figures mentioned in our global e-waste infographic.

Since launching in 2007, Pure Planet Recycling have provided services to businesses, schools, universities, local authorities and even Royal palaces.  Our prime focus has always been to provide the best possible experience for our customers from the moment they get in touch with us.  With decades of waste industry knowledge, sound business experience and technical expertise behind us, we aim to take all the hassle out of recycling and data destruction for you.  We are also fully regulated by the Environment Agency and are ISO14001 accredited so you know you're in good hands.